Hacks, Mods, and General Discussion for all other consoles.
Post Reply
2 posts • Page 1 of 1

Could devices like this be the feature of deaktop PC gaming? 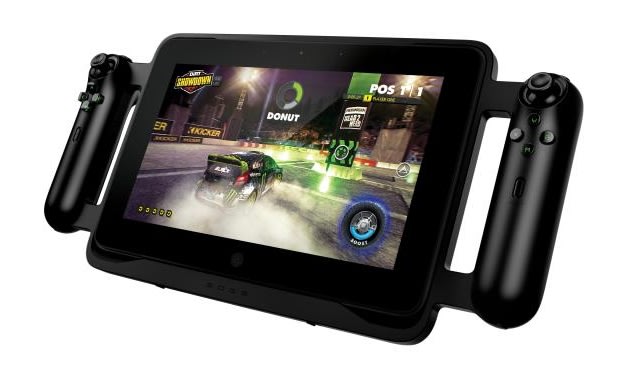 LAS VEGAS--Gaming hardware usually takes a backseat at CES, but this year seems to be an exception. We've already seen Nvidia's blockbuster Project Shield handheld Android/PC game streaming device. Today Razer announced the Edge PC gaming tablet, and we took a good long look and play with it along with Razer CEO Min-Liang Tan at this year's CES.

Razer teased the tablet at last year's CES under the code name Project Fiona. The company then conducted a crowd-sourcing campaign in which gamers provided Razer with feedback about the specs they'd like to see in a mobile PC gaming device.

ItÃ¢â‚¬â„¢s an innovative approach, but the result is what you could probably guess anyway: the Edge splits the difference between hard-core gaming PCs and tablets with a full-fledged Windows 8 tablet running an Intel Core i5 or i7 processor and Nvidia GeForce GT640M LE graphics. It looks...well, it looks like a tablet. But, under the hood, it has the guts of a high-powered gaming ultrabook.

If the specs are perhaps predictable, it's the accessories that help it stand out.

The accessories help the Edge transform into a few different modes: a handheld dual-controller case looks nearly identical to the Project Fiona images shown last year. It adds gaming console-like buttons and sticks and makes the Edge a large gaming handheld, of a sort. 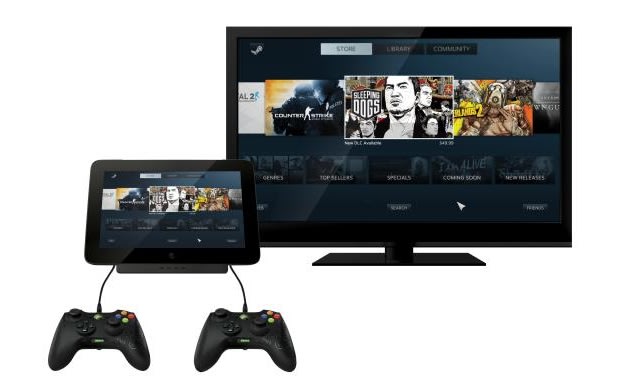 There's also a dock that offers external HDMI and USB connectors to plug into a TV and add additional Xbox 360-like controllers, for two-player simultaneous gaming. You can use the dock with a larger-screen monitor or TV, or as a standalone device.

A keyboard accessory turns the Edge into a little gaming hybrid device, and both the keyboard and the game pad accessories support a removable battery that doubles the life of the Edge. You will likely want an extra battery, too. Without it, Razer estimates the Edge has 2 hours of power during general tablet use, and around 1 hour when you're playing games, but an extended 40-watt battery will take gaming use up to 2-4 hours, or around 8 hours for less graphics-intensive tablet use.

The Edge costs $999 in its base configuration with a Core i5 chip, 4GB of RAM, and a 64GB solid-state hard drive. That's in the same ballpark as other Windows 8 tablets like Microsoft's forthcoming Surface Pro.

The $1299 Edge Pro model will get a bump to Core i7, 8GB of memory, and either a 128GB or 256GB SSD. A $1499 bundle includes the game pad case. Both models are available for purchase today from online retailers and Razer's own Web site, but will be available starting Q1 of 2013.

We had a chance to play with the Razer Edge in all its various modes, and in person it surprises and impresses more than we even expected. In particular, the Edge shines as a desktop or TV-connected device: its easy keyboard, mouse, or controller hook-up turns the 10-inch tablet into a pretty capable gaming mini-console, and games ranging from Dirt Showdown to Dishonored looked and played better than we thought they would. Granted, the Edge only has a 1,366x768 display, but the smaller IPS screen's pixel density shows off the games to very good effect, and held in your hands, it obviously blows away any gaming handheld.

Held in your hands, the Edge is a tiny bit more awkward. The game pad looks cool and controls well, but the dual-stick yoke and feel and the size of the entire package makes for an odd in-hand feel: bigger and heavier than any handheld, and your hands end up farther apart than they'd be using a standard game controller. 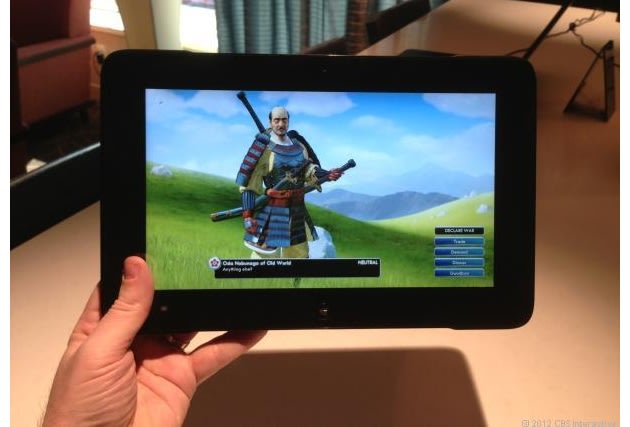 Split-screen simultaneous gameplay on a large-screen TV using the HDMI-output on the dock works as well as advertised. The Edge supports 720p output, and a heated race in Dirt Showdown was highly playable and fun using the Xbox 360-like Razer controllers.

The laptop-like keyboard dock, coming later this year, gives the Edge a feel that's reminiscent of the original Switchblade "gaming netbook" concept from several CESes ago, except in this case the Edge is a far more powerful, even smaller-screened PC. Using the keyboard and either touchscreen or mouse controls to play games like Rift worked pretty well, too.

The Razer Edge, along with Nvidia's Project Shield, signals a strategy shift from companies with strong ties to PC gaming due to an increasingly portable consumer computer landscape. Whether gamers of any variety want these devices is an open question, but we expect they won't be the last to tempt PC gamers away from the desktop. The best news about the Razer Edge is that it's ready to go: all its modes feel weirdly practical, avoiding the challenges that the touchscreen Switchblade UI continues to pose for Razer's Blade gaming laptop. And, especially compared to the Blade, its price isn't too high. As a demonstration of the evolution of the PC and PC gaming, the Edge succeeds.

Pretty cool stuff there Mattie. I know my kids would be all about it .

Users browsing this forum: No registered users and 1 guest